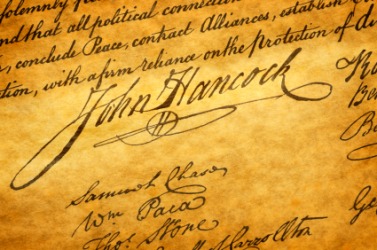 John Hancock’s name is synonymous for any signature. “Put your John Hancock right here,” we’ll say and every American knows what that means. John Hancock has one of the most recognizable signatures in history. When he signed the Declaration of Independence, he did so in big, bold, flamboyant letters. He stood for truth, justice, and the American Way.

On signing the Declaration of Independence he commented, “There, I guess King George will be able to read that!” I always loved that story. I can picture John in his defiance, filled with indignation for King George making that statement. Today we would say, “Take that you big bully!” Unfortunately John Hancock didn’t say that. It’s not true.

Actually after he signed the Declaration he exclaimed, “There! John Bull can read my name without spectacles and may now double his reward of £500 for my head. That is my defiance.” I can picture him saying that in great indignation. Today we might say, “Take that, Johnny Boy. Put that in your pipe and smoke it!” Ah….actually John Hancock didn’t say that either. It’s not true.

What he really said was, “The British ministry can read that name without spectacles; let them double their reward.” Ah….that’s not true either.

Well, I mean, there’s no documentation on what he said after he signed. I guess it’s easy to put words into someone’s mouth, especially if he’s dead. He might have said, “Here’s you pen back. Thanks for letting me borrow it.” It’s amazing how all of these statements credited to Hancock have wormed their way into all sorts of books as fact, including history books. No need to ruin a good story by researching to find out if it’s true or not.

The truth is the delegates to the Continental Congress didn’t sign the Declaration of Independence on the day it was adopted, July 4, 1776. After Congress adjourned, Hancock was given the job of making the revisions agreed upon, signing it, and sending copies to the colonial legislatures for approval. So when he signed it, the chamber was virtually empty except for one other man, Charles Thomson, the secretary of Congress (and he’s not talking!). So there was no need for inspiring rhetoric to rally the troops or get others to sign.

The famous painting by John Trumbull shows John Hancock signing in the midst of a crowd of delegates. This bit of creative license by the artist adds to the lore. It was August before the rest of the delegates signed. Who knows what John was thinking when he signed? Maybe his handwriting was naturally big. Maybe he couldn’t see well so he signed it big so he could read it. Who knows?

This of course doesn’t diminish the role John Hancock played in the American Revolution, the Revolutionary War, and the forming of the U.S. Not only did he lend his bold signature to the cause, he provided the much needed encouragement to win the revolution….money. He was rich, rich, rich. And he put his money where his mouth was…or should I say signature was. 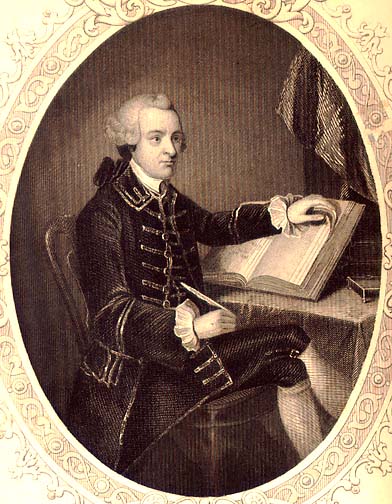 John had inherited his money from a rich uncle who raised him. John’s father died when he was quite young, so his mom sent him to be raised by his Uncle Thomas, a rich businessman and…ahem…smuggler in Massachusetts. Thomas took young John under his wing, taught him everything he knew about the merchant business, and made sure he got a good education. John was a fast learner. When Thomas died, John Hancock became one of the richest men in America at age 26. He wasn’t a frivolous man. He was very civic minded. Some of his best friends were John and Samuel Adams (Yes…the very Sam Adams the famous beer is named after). He went on to serve as President of the Continental Congress and was elected governor of Massachusetts nine times.

We cannot make light of the fact that signing the Declaration of Independence was gutsy. These men were taking a big chance. The signatures had to remain secret for several months to protect signers from being charged with treason. John, being the first signer, might have thought others would sign their names as largely as he did. Boy, was he surprised?!

But then, where would we be without his bold signature and legends surrounding it? What fiction mixed with truth would we pass on for posterity? After all, isn’t that the American Way?