After years of bondage in Egypt it was only natural that the Israelites had absorbed quite a bit of the Egyptian culture. When God delivered them He wanted them to be a separate people – an example to surrounding nations. To accomplish this God provided them with a set of laws.  If the Israelites obeyed this covenant God said that they would be His “…treasured possession…and a holy nation (Exodus 19:5-6).”

Therefore the book of Leviticus is crammed full of detailed procedures, rules, and rituals the Israelites were expected to follow. Each instruction had a specific purpose designed for the time in which they lived – in Old Covenant times. However – times change.

When Jesus came to establish a New Covenant, things would be different. No longer were godly people identified by their rules and rituals. Their identity would be in Christ.

This was a hard concept for the Pharisees to grasp. The Pharisees were the religious experts of the time, the keepers of the Mosaic Law. By the time they encountered Christ certain rules had been added to the law, many becoming extreme customs – so much so that the original intent of the written law was often lost. Yet, they felt the observance of these regulations were vital in keeping God’s favor and considered themselves the righteous standard for obedience to God.

Jesus claimed to be the son of God but he continually violated the Pharisaical “godly” customs. For example, He ate and drank with sinners which made him ceremonially unclean (Luke 7:34-39). He broke the Sabbath by healing people (Luke 13:14) and picking a little corn to eat (Matthew 12:1-2). He and the disciples did not participate in the ceremonial washing of their hands before they ate (Mark 7:1-23). 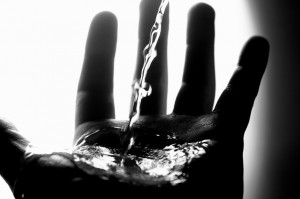 Now this washing of the hands ceremony was a little bigger deal than just using some hand sanitizer for healthy eating.It went something like this: Fingertips pointed up. Water poured down them until it ran down the wrist. A palm would be clean with the fist of the other hand. Fingertips would then point down. Water poured down them until it ran off the finger tips. Then they would switch hands and repeat.

Shockingly, Jesus did not do it that way. When the Pharisees asked him why he replied with a quote from Isaiah 29:13: “These people honor me with their lips but their heart is far from me. They worship me in vain, but their teachings are but rules taught by men.” He went on to say, “You nullify the word of God with your tradition (Mark 7:13).” In other words, “You think your traditions are more important than the word of God!”

Christ was saying that what we do is not as important as why we do it. Jesus did not come with a list of rules and regulations. He came with His teachings and the law of love.

In New Testament times people were used to seeing “works” – customs and rituals being performed. So they asked Jesus, “What must we do to do the works God requires?” Jesus replied, “The work of God is this: to believe in the one He has sent (John 6:28, 29).” This was a new, radical concept.

Most of us think, “Those silly Pharisees. They just didn’t get it!” How could they set up their own customs, rituals, and standards of righteousness and think they were God’s?

But how many of us really “get it?” How many of us have subconsciously done the same thing, worshiping traditions more than Christ?

Are we tied to total immersion baptism, how often we take Communion, the order of our church service, the tempo of our worship music, what instruments are allowed in church, certain hymnals, dietary habits, circumcision, tithing, Old Testament holy days, hair length, specific Bible translations, abstaining from alcohol, men wearing ties to church, women wearing dresses, Saturday or Sunday worship, the altar call, collecting an offering, and so on? There is nothing wrong with having opinions about these things or even doing them in a “traditional” manner – one to which we have grown accustomed – but when we focus more on what we do instead of why we do it, we miss the mark.

The same goes for those who break tradition. Are they doing it as an act of rebellion? Are they judging and condemning those who like tradition and ritual? It works both ways. God’s word is a two-edged sword.

If a custom or ritual can enhance our relationship with God, then so be it. But we must control our rules and rituals; they should not control us. If they control us we have no flexibility or room for anything that might be a little different – sort of like the Pharisees.

We need to keep perspective. After all, God has called us into a relationship not a ritual (1 Corinthians 1:9).